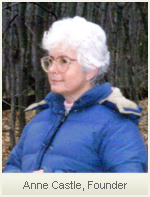 The Inn & Spa at Cedar Falls began as a vision of Anne Castle, a well respected businesswoman who gave up her corporate life to establish a place where the ever-growing number of urban dwellers could retreat to a natural setting.

After two and a half years in the making, the vision became a reality when The Inn opened in 1987. Those two plus years were not without struggle. Located in each room at the Inn & Spa at Cedar Falls, is a brief history of The Inn. It states: “This is not a Pollyanna-glad-girl story, however, the struggle to withstand backbreaking work, mind-bending discouragement, seemingly countless physical, emotional and financial blocks, is a long tale…” A story not unlike many great entrepreneurs.

Countless old and newly-discovered friends believed in Anne’s dream and worked fervidly to bring it into fruition. Anne hired local contractor Terry Lingo to complete all construction phases. Ellen Grinsfelder, Anne’s daughter, moved to the area 6 months before opening and remains the Innkeeper, along with Terry. Terry and Ellen met and married shortly after the opening of the Inn. Jointly, Anne and Ellen ran the business until Anne’s death in 1991.

Today, Ellen and Terry, as well as their outstanding staff continue to carry on Anne’s dream. With help from friends, staff and family, they’ve developed a place where guests can “come home”.

The opportunity to be still for a few moments was inspiring.